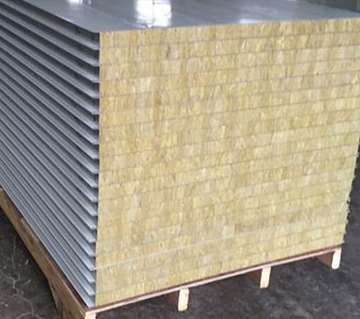 The rock wool in the traditional metal face rock wool sandwich panel is integral, but the strength of the board is relatively low. The metal surface of the upper and lower plates also has metal punching plates, both sides are laminated with polyurethane foam layer and cut rock wool board, and the intensity is mainly supported by the metal punching plate.

A kind of high strength metal faced rock wool sandwich board is provided. The inner surface of the metal surface and the lower plate are respectively coated with a bonding layer. The cut rock wool is sandwiched between the two bonding layers. The length of the rock wool cut is less than 1 / 2 of the length of the sandwich board. The wool between two adjacent rows at the end seam of the cutting rock is staggered.